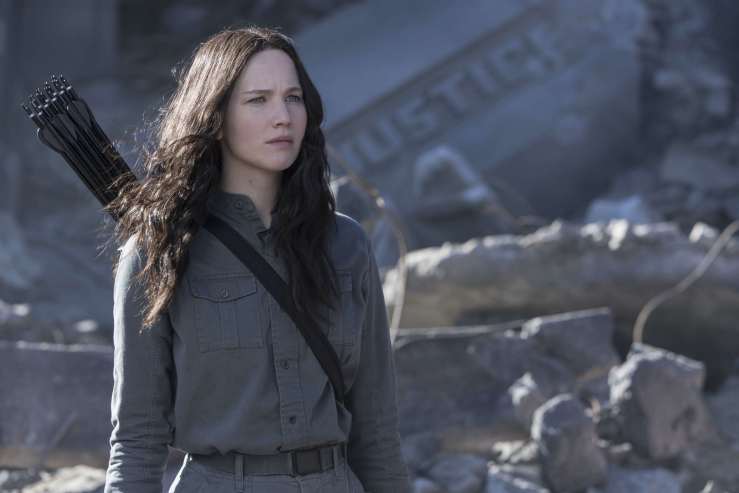 Katniss Everdeen is 17 years old. She has survived two Hunger Games. She grew up in District 12, which is now destroyed. She escaped to District 13, which is not destroyed as everyone thought. Peeta was captured and taken the Capitol—or maybe killed.

These are the facts Katniss (Jennifer Lawrence) must remind herself of when she wakes from nightmares. As Finnick (Sam Claflin) tells her, it takes longer to put yourself back in one piece than it does to fall apart, and she is barely holding herself together as it is. Then, Peeta (Josh Hutcherson) shows up on TV—promoting the Capitol. To counter, President Coin of 13 (Julianne Moore) and former Head Gamemaker Plutarch Heavensbee (Philip Seymour Hoffman) ask Katniss to become the face of the rebellion and its ad campaign. Though the districts are disjointed and ill-equipped, they will respond to the call of the Mockingjay.

Needless to say, the hearts and minds of Panem cannot be won simply with a PR blitz. Soon the battle for the airwaves becomes a battle of air raids with Katniss, Gale (Liam Hemsworth), and her camera crew right in the middle of President Snow’s (Donald Sutherland) mind games, public executions, and firebombs.

If you’re looking for a feel-good movie or are attached to action flicks with well-timed comic relief, Mockingjay – Part 1 is not what you’re looking for. That doesn’t mean Mockingjay bores or skimps on the action; it just means that if you want to watch a movie that will put you in a sunny mood, you should wait to rent Guardians of the Galaxy instead.

On the other hand, Mockingjay was nearly everything I was hoping for as a fan of the books. While the whole premise of the series is far from cheerful, the last of the bunch is inarguably the darkest. Even so, I couldn’t put it down, and the movie captures viewers just as much. Maybe I wished for a tweaked scene or two (more Finnick, please!), but like its predecessors, Mockingjay – Part 1 strikes a healthy balance in staying faithful to the book and bringing new creative material, like showing a pivotal part of the climax that Katniss only heard about secondhand in the book.

Better yet, it delivers on what you came to see: tons of Katniss, heartbreaking romance, Snow acting deliciously evil, and yes, the sweet bows and explosive arrows. And if you’re worrying about feeling depressed for two hours straight, don’t. A few laughs sneak in from Haymitch (Woody Harrelson) and Effie (Elizabeth Banks), and—perhaps significantly—this reviewer didn’t cry once (and it doesn’t take much for her to do that in a movie).

Mockingjay proves yet again that sticking with the source material pays off. However, it also shows—perhaps more importantly—that a good adaptation doesn’t need to be confined by that material. In fact, it can make a story you loved already even more fantastic to see than to imagine. 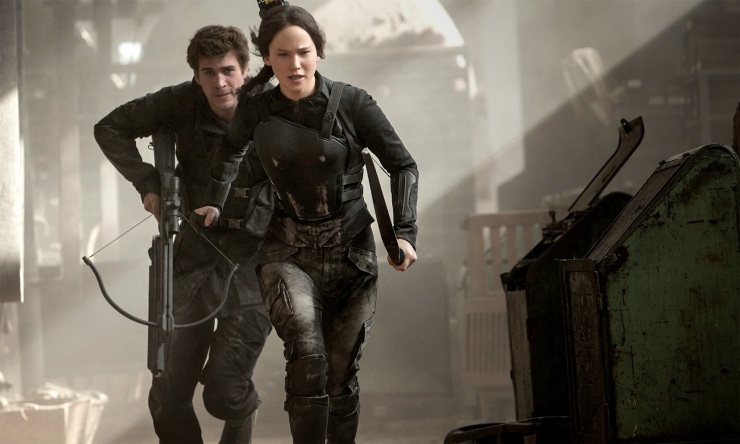 After months of trailers and buildup in a major (and rather excellent) marketing push for Mockingjay – Part 1, I had two questions:

Answer #1 surprised me. Although there are exceptions, splitting a single book into multiple movie installments seems more cash-driven than an actual good idea. Let’s remember when Harry Potter started the trend, it was because the last two films were based off of a 700-plus page book. Now another novel that Barnes & Noble lists as just over 300 pages is being dragged out to three near-three-hour films, largely with the help of filler scenes and invented storylines. Another YA adaptation series has declared it will split its last book into two films, and I wouldn’t be surprised if the makers of one more franchise haven’t crossed it off the list yet.

Mockingjay probably could have been squeezed into one decent film. However, considering this first part turned out so well-paced and it actually built to a real conclusion, I’m glad the writers and editors didn’t waste their time paring it down.

Which leads me into Answer #2. Part 1 inhales in preparation for a dramatic ending but still tells its own story. This third film feels different from the first two for a number of reasons, but the biggest may be that the plot forces the series out of its familiar Reaping-Training-Games structure. In ditching that format and the split, this chapter has time to explore new themes like politics within the good guys’ ranks and war propaganda while still including the attention to detail I’ve come to love (such as moments with President Snow’s granddaughter).

Another important detail: much of this would be harder to pull off without the superb cast. The returning team of actors stretches their characters to new depths of strained and suffering, and they work just as well with modified character arcs that come with the new three-act framework. For example, Gale and Peeta flip-flop their screen time, letting Liam Hemsworth shine front and center after spending two movies brooding away from most of the action. Josh Hutcherson is relegated to the background, making it indecipherable if his personality change or his absence made him less bothersome than in previous films. (I guess the final installment will be the verdict.)

Keeping Elizabeth Banks’s Effie on board (a large departure from the book) was an excellent choice as well, as she serves the functions of four minor characters with more spunk and humor than any of them could have provided. Natalie Dormer and Julianne Moore confirm the smart casting. (Then again, Julianne Moore probably deserves credit for knowing her worth.) And in case you’re wondering, Jennifer Lawrence continues to be great as usual—she’s not a bad singer, either.

One last important detail to note: Mockingjay achieved this in barely two hours and still found time to showcase some incredible set designs, both real and CGI. Take note, Mr. Jackson—this is not The Hobbit.