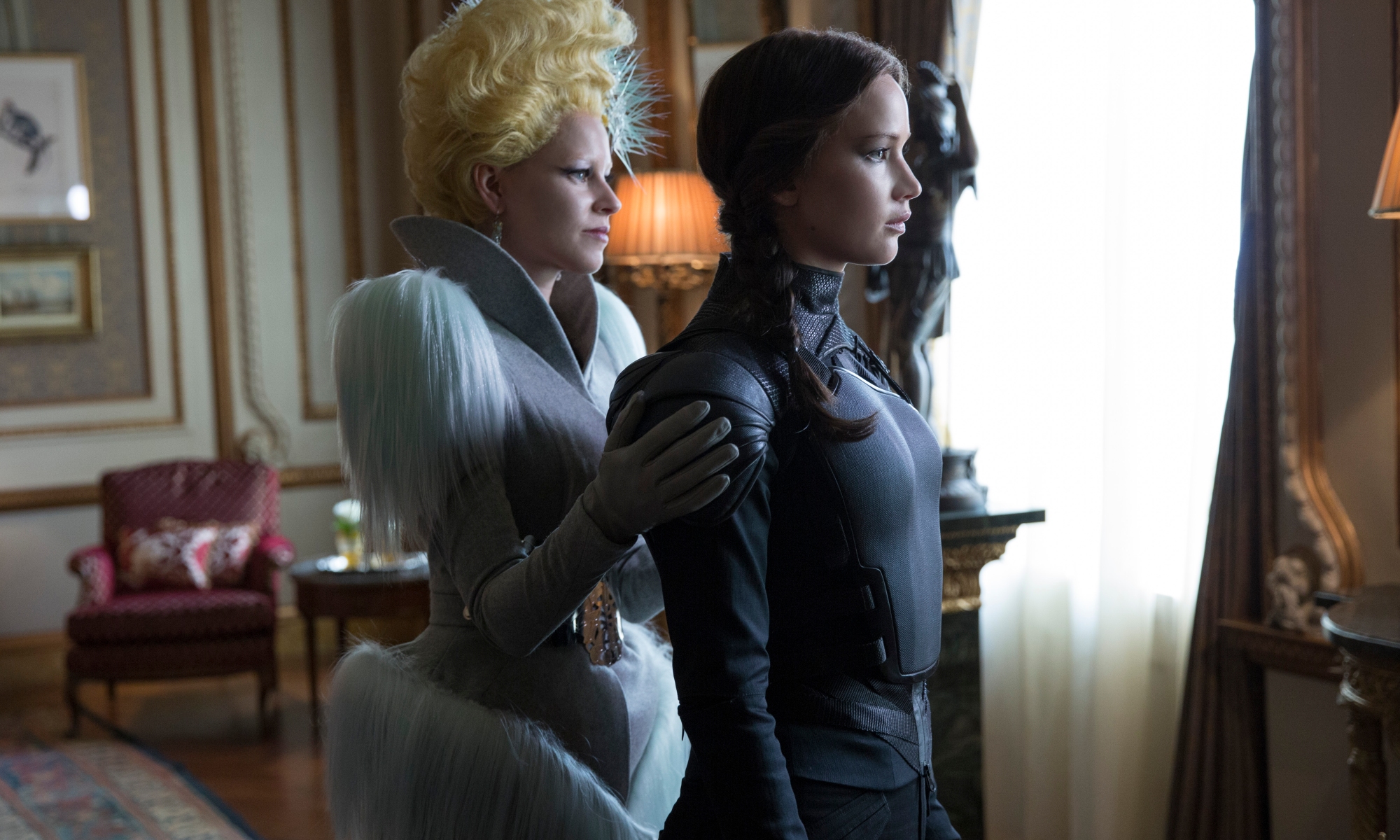 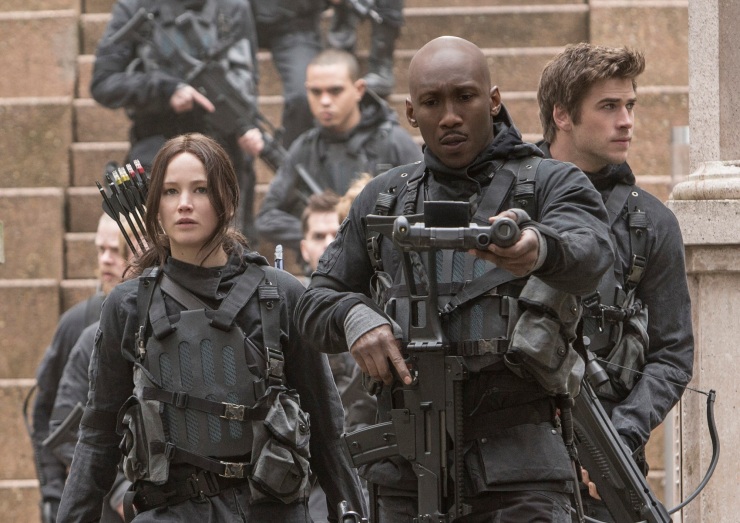 A new set of bruises and scars ring around Katniss’s neck. Not that bruises or scars are anything new for her—it’s who they came from that throw her off. Peeta, her friend, fellow victor, onetime fiancé, and continual ally, was the one who pinned her to the floor to strangle her. But she hardly has time to consider this now. The districts’ are finally charging against the Capitol, and she cannot lose her focus. No, she must ignore a disturbed Peeta, her bickering with Gale, and President Coin’s request she hang up her bow. She must kill President Snow, no matter how many rules and bones she has to break to get there.

As you might expect, the Capitol will not make it easy for her. Snow is as formidable an adversary as any or all of the competitors in her two Hunger Games, and he is targeting all of the Capitol’s firepower at her. A nightmare for Katniss is a thrill for us, however. We follow her and her rebel squad through every land mine, booby trap, and muttation that the Gamemakers have set up for them, and true to form, the Gamemakers don’t show any restraint. As far as action goes, the odds are definitely in our favor.

As far as non-action scenes go, though, The Hunger Games: Mockingjay – Part 2 has a little more trouble taking flight. The story takes awhile to reach any action sequences with risk because of all the talking and plotplotplot they try to pack into the first third of the movie—a movie that’s based on the second half of a book, mind you. Is it tedious? No, but it lacks a certain energy you’d expect in the dramatic conclusion to a modern epic about overthrowing an evil empire. Maybe everyone was just holding their breath in anticipation for the rebirth of Star Wars a few weeks later, but even the buzz and marketing felt less urgent than for the previous films. It seems like everyone decided the conclusion to this franchise was, well, just foregone.

I wish I could say that the movie deserved better hype and a more impressive box office. (A $102 million opening is nothing to sneeze at, but it’s disappointing when you consider it’s the lowest of the quartet.) But it’s more accurate to say this strong franchise deserved a better ending. An unofficial poll might tell you Mockingjay was readers’ least favorite book of the three anyway, but it’s full of high stakes and genuine, jaw-dropping moments. A wartime story may not allow for the visual flash, sparkle, and costumes of the first two movies, but it’s a shame this one rushes through the emotional highs and lows to the point it just feels like it’s just reciting the book. (But more on that in the Critic review.)

Bottom line: If you’ve been a fan of Katniss’s adventures since the 74th annual Hunger Games, don’t skip her final search for peace in Mockingjay – Part 2. Though not quite up to par, it’s still more time with the characters you care about, and it’s the culmination of all they’ve worked for in this series. In that sense, this flawed finale still satisfies.

A fire mutt knows only a single sensation: agony. No sight, no sound, no feeling except the unrelenting burning of flesh. Perhaps there are periods of unconsciousness, but what can it matter if I can’t find refuge in them?.…“Let me die. Let me follow the others,” I beg whatever holds me here. There’s no response. Trapped for days, years, centuries maybe. Dead, but not allowed to die. Alive, but as good as dead. So alone that anyone, anything no matter how loathsome would be welcome.

When I reviewed The Hunger Games: Mockingjay – Part 1, I asked two questions:

1. Was it really worth it to split into two movies?
2. With a new narrative direction, would it still tell the story well?

After 1000+ words on the topic, the short answer to those questions was yes. I appreciated that the split allowed for theme development that would otherwise be rushed, such as the flaws among the heroes’ ranks and the satirization of war propaganda. The shake-up in plot structure also created new opportunities for character development.

As for Part 2, I have no idea where those storytelling strengths went. Between weird pacing and a frustrating inability to hit emotional beats, I’m rethinking my answers to both questions.

In the novel, Katniss battles with her desire for revenge on President Snow. What starts out as a just goal to protect her family and friends turns into an unhealthy obsession driving all of her actions. She also fights a deep-rooted fear that everyone is worse off because of her choices. As you may have gathered in the excerpt above from a chapter of great physical and emotional pain, her depression and PTSD win those fights sometimes.

In a rather baffling move, the film hardly touches on those inner conflicts, instead using that time to explain again how the Gamemakers set up pods around the Capitol. (If I had a dollar for every time I heard the word “pod”…) This not only takes away from Katniss as a character, it waters down the emotional truth of the story. While there’s no need to dwell in despair (one of the clear themes of the series is hope, after all), glossing over her internal war steals the gravitas of the losses she faces and her ultimate victory over oppression. I have sobbed while reading the final chapters of the book; I only teared up once in the theatre.

As for the romantic beats? Let’s just say Lorelai and Babette from Gilmore Girls summed up my feelings nicely. And while my final verdict on Josh Hutcherson is that he was miscast, some of the best assets of this franchise still shine through. Donald Sutherland is at his best as President Snow, simpering as he watches his empire crumble around him. To his last scene, Liam Hemsworth is affecting, and Woody Harrelson and Elizabeth Banks elevate the mood any time they’re on screen. (Mild Spoiler: The added Hayffie fan service was actually a nice touch.)

Bottom line: While the series started with a bang ushering in Jennifer Lawrence, a new kind of action heroine, and the trend of adapting dystopian YA novels, The Hunger Games: Mockingjay – Part 2 ends the series with a whimper. Based on the powerful filmmaking in the other 3 movies, it wasn’t unreasonable to expect a quality finale. Instead, it’s a collection of missed opportunities for thematic and emotional depth.