Tom Cruise Secures This Sequel a Sunday Afternoon Cable Slot, Not Much Else

Jack Reacher is a drifter. We learned this in his inaugural 2012 movie—at least, I think so. I saw Jack Reacher, and my vague memories include him breaking into a construction trailer to rescue…wait, Rosamund Pike was in this movie? And David Oyelowo? Thank goodness for IMDb, or I would have only remembered everyone’s favorite(?) typecast bad guy, Jai Courtney.

If my spotty recollection is any indication, Tom Cruise’s newer action franchise—the one without “Mission” or “Impossible” in the title—left little lasting impression. Jack Reacher: Never Go Back (or as I kept mistakenly calling it, Jack Reacher: Never Stop Reaching) won’t be any different from its predecessor.

Yes, to confirm, Reacher (Cruise) is an ex-military drifter, who travels cross-country until he finds a reason to stop, usually for someone in need. After busting some small-town dirty cops, he connects with Army Major Susan Turner (Cobie Smulders), who organized the sting from Washington. After a few flirtatious phone calls, he directs his hitchhiking East, only to learn Turner has been arrested on charges of espionage. Convinced of her innocence, he will stop at nothing to clear her name and uncover the conspiracy threatening her life and career—even if it means committing treason himself. 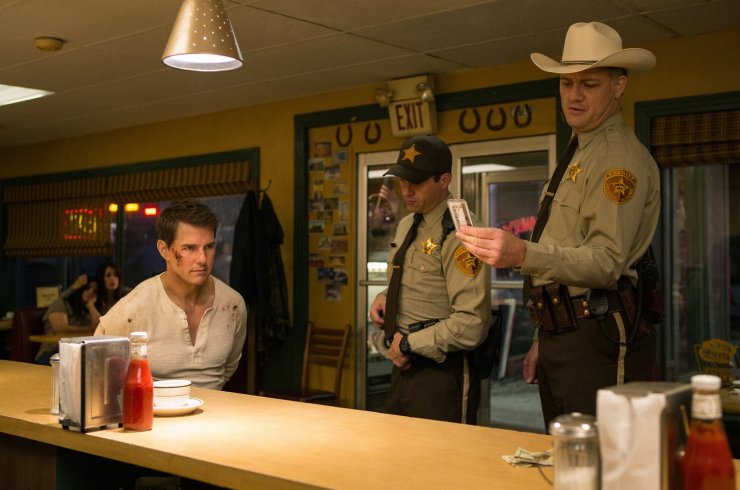 Whether or not you call yourself a fan, you’d be hard-pressed to find anything better than Tom Cruise is in this movie. I’m not suggesting this performance is his spiritual follow-up to Rain Main or Jerry Maguire (or heck, even Mission: Impossible), but he’s still the master of delivering snarky, knowing one-liners and that charming, cocky grin. It’s a narrow niche, but no one does it better.

Thank goodness for Tom Cruise—he’s the only reason this movie is worth a Sunday afternoon cable slot.

The Reacher films know that, which is a valuable asset for a series at a quality level better suited for the Lifetime network. Though the action is high-stakes and convincing, that channel is the only place this dialogue would pass with flying colors. The story reads like a long list of clichés (a number of them reminiscent of Taken), and its uneven character development makes it unclear when we should sympathize with our main characters. Poor Smulders tries her best to make the material work, but shouting can’t redeem lines like, “Is it because I’m a WOMAN?” and “Open it—OPEN IT!” Oh, and did I mention “d—head” is used as an insult? Twice?

The most perplexing moments come down to motivation, though. Why would Reacher risk his future and reputation for a colleague he barely knows? Why would Turner’s lawyer share convenient, confidential information with her ex-military acquaintance? Why would this lawyer also be the first to tell Reacher a lawsuit was filed against him? Why would Turner and Reacher discuss classified information—some of the very information she was accused of illegally sharing—in the back of a taxi and on a plane?

This movie seemed to want to make statements on responsibility and personal freedoms, but it mostly sent me away with thoughts about how its Halloween parade climax in New Orleans felt like a lower-budget version of Spectre’s opening Day of the Dead sequence in Mexico City. Thank goodness for Tom Cruise—he’s the only reason this movie is worth a Sunday afternoon cable slot.