Imagine Google, Microsoft, Apple, and Facebook—all combined into one. Now call it The Circle.

Mae Holland (Emma Watson) shakes off a string of dead end temp jobs the first chance she gets to taste the potential and prosperity of the tech company. Even though she’s working in customer service like before, The Circle feels like a dream with her enviable paycheck and enthusiastic coworkers, including close friend and Circle exec Annie (Karen Gillan). With dorms, restaurants, gyms, healthcare, and constant social events on campus, why leave?

But as you can predict with any seeming utopia, Mae begins asking questions that reveal cracks in the façade. What is The Circle using the data in her Fitbit-like bracelet for? Should the government regulate one of the world’s leading companies? And how many screens is she expected to keep in front of her at once? The answers are undisclosed, unsettled, and up to eight by my count.

With the affability of Tim Cook, the philanthropic heart of Bill Gates, and the innovation of Steve Jobs, Hanks’s Bailey keeps this plot credible.

The Circle, much like the Dave Eggers novel it’s based on, feels closer to 2017 than I’d care to admit. Its existence feels urgent purely because of its study of internet privacy and the worldwide oligarchy tech companies have created to rival official states. That said, director James Ponsoldt’s straightforward style and the script he co-wrote with Eggers may be efficient and clear, but the filmmaking lacks the urgency to match its subject matter. Trailers sold the movie as a thriller, but that’s a bit of a stretch. Secrets and lies shape this story, but Mae’s arrival does not hearken the unraveling of a conspiracy. The antagonist here is not the company or even its chief officers Eamon Bailey (Tom Hanks) and Tom Stenton (Patton Oswalt), but human nature’s tendency to push boundaries without thought. That’s more complicated to show on screen, which is why some dialogue instantly clunks, especially from Ellar Coltrane’s vehement anti-grid proselytizer. 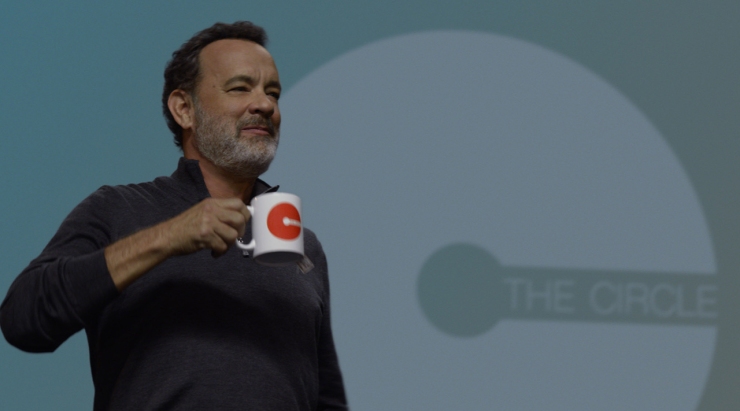 More unexpected is how The Circle plays with audience expectations for “America’s Dad” Hanks. Given the chance to subvert his good-guy persona, he becomes one of the film’s greatest assets. With the affability of Tim Cook, the philanthropic heart of Bill Gates, and the innovation of Steve Jobs, Hanks’s Bailey keeps this plot credible. His frequent recitations of the company’s mottos “Sharing is caring,” and “Knowing is good. Knowing everything is better,” at meetings resembling Apple Special Events and TED Talks never feel forced.

And this cult-like community always feels lived-in. Ponsoldt integrates hundreds of online comments in pop-ups around characters in select scenes to remind us of the constant feedback of the digital world. Sometimes they’re supportive, sometimes they’re angry, and sometimes they’re completely irrelevant. Not that it matters—The Circle will have them on record forever no matter their content. Sounds a lot like the Library of Congress’s desire to archive and index every tweet, no? Like I said, The Circle feels a lot closer to 2017 than I’d care to admit.