The scene: Rose Creek, a small town in the Old West. Our villain: Bartholomew Bogue, a mining tycoon and robber baron. Our heroes: Seven misfit mavericks, each with time and no qualms to kill.

If a team with expertise in a diverse skill set sounds familiar, there’s a reason: The Magnificent Seven is basically a Western Ocean’s Eleven with less polish and a higher body count. The story even culminates in a Danny Ocean-level complicated scheme, though the quasi-cowboys bring a more cavalier flare. This cast is stacked with charm, too. Washington, Pratt, and Hawke carry the star power, but there’s not a weak link in the crew. All are funny, and all are formidable when the movie needs them to be. 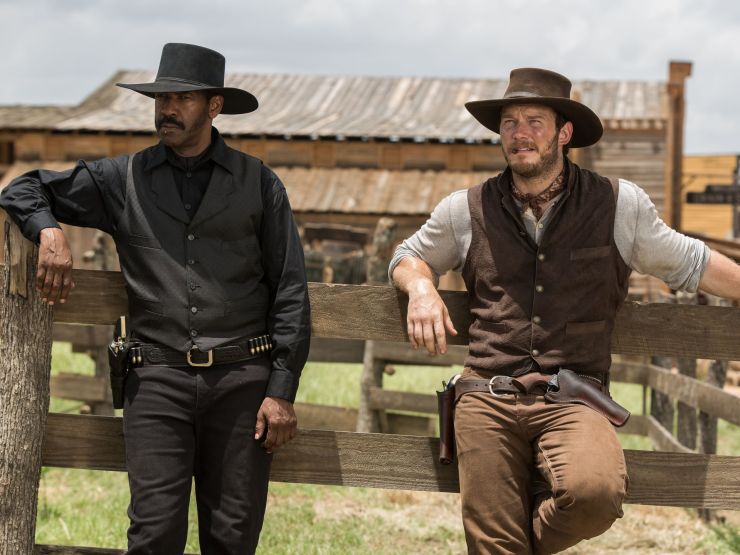 Also cavalier? Their bullets. Director Antoine Fuqua’s 2014 outing The Equalizer made me uncomfortable with its gleefully sadistic violence, finding torturous ways to dispose of its mobster antagonists. (Let’s just say the climax takes place in a hardware store, and Denzel Washington gets creative.) The Magnificent Seven reigns that in some to keep a PG-13 rating, but not without skirting the line with explosives, flaming arrows, and raining bullet shells. (Mild spoiler alert!) To be fair, Sarsgaard’s Bogue is a more compelling, evil through-and-through bad guy than the Marvel Cinematic Universe has ever come up with, and a weaker comeuppance would have been dissatisfying. But because the movie is about 15 minutes longer than it needs to be, you sit through quite a bit of bloodshed to get the one moment of justice you’ve been waiting for. (Ye who walks through the Valley of No Spoilers, begin reading again here.)

Bottom line: The Magnificent Seven may be a little too long, a little too bloody for some, but it’s not solemn. The rare cinema visit to a Western should be a high-stakes adventure, and the movie never loses that focus to the golden horizon.

Reader, please forgive me, for I have cinematically sinned: I watched the Magnificent Seven remake before the 1960 original. It felt a little like watching the film based on a classic novel instead of reading the actual book for a literature class. Does it make it worse that I liked it?

The setup of the 2016 Magnificent Seven is deceptively simple. It’s a Western with clear-cut good guys and bad guys. The gunslinging shootouts quench any filmgoer’s thirst for action. The cowboys wearing spurs while riding into the sunset might as well just come out and say, “This town ain’t big enough for the two of us.”

But The Magnificent Seven more subversive than that. Let’s start with the Magnificent Seven themselves. They’re a mixed bag of vigilantes, with almost as many backgrounds and social standings juxtaposed as possible in the Reconstruction Era United States. Five different ethnicities, young and old, devout and irreverent, war heroes and outlaws, former Confederate and Union soldiers. In the narrative, these seven are slapped together, but the storytellers were intentional in these decisions. A fulfilling and nuanced discussion of the race and gender roles in this film requires more spoilers than suits this review, but suffice it to say, my mind has not stopped turning these character choices over and over in my mind. 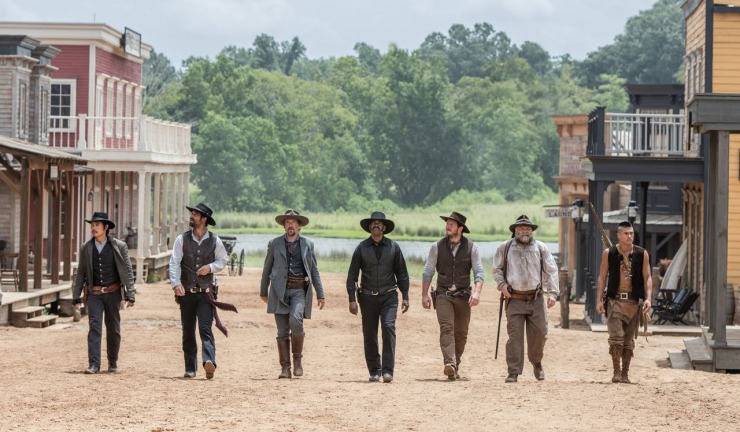 Another form of subversion: When was the last time you watched an action film and found yourself needing the term “mise en scène”? So many films in the genre seem to set the action in night clubs just to tick off the boxes of seedy drug rings and scantily dressed women, but the backdrop here feels deliberate. The conscious use of space again reminded me of The Equalizer. Though I had some reservations with that feature (see my Crowd review), Fuqua found inventive ways to use a hardware store environment for maximum impact. In The Magnificent Seven, the characters use every corner and open space of the main set of the hapless town Rose Creek. If any CGI was used to create the town, it’s undetectable, building on the film’s authentic, rugged feel.

Bottom line: The Magnificent Seven is a far more considerate film than it needed to be, which is one of the best kinds of surprises a film can pull. So pardon me, dear reader—I will likely need to ask for your forgiveness once more when this film hits Redbox and On Demand. A rewatch of the remake feels more pressing than getting around to finally seeing the ‘60s classic.